Earlier today, I read about a poll conducted that asked people about life changing burritos.  The results indicated that El Farolito burritos changed the most respondents’ lives by a wide margin.  This evoked an immediate response:

First, I question whether lives really changed.  And if they changed, how so and why is the change due to this burrito?

Second, I question the validity of the survey and audience composition.

Why?  One of the first-remembered recommended taquerias in San Francisco came from a co-worker who lives in Austin, TX.  She claimed to have dreams about burritos from El Farolito.  She strongly urged that I try it and report back to her.  I indulged, but I was disappointed.  Not because the burrito was bad, but because it was good.  It was not life-changing, only good.  Something didn’t seem right!

I have a standardized burrito-eating process.  I tend to get the same, favorite options in order to have something consistent to compare against: regular (not super, which is typically meat, rice, beans, and sometimes salsa) carne asada burrito, plus some salsa and limes/lemons.  I will try a few bites of the  burrito without adding anything in order to see how it comes originally prepared.  Next I’ll try it with limes, then with salsa, lastly with limes and salsa.  Only this way do I see what the burrito has to offer, and how (if at all) it is complemented by the lime and/or available salsa(s).  This goes back to my appreciation of harmony, how the whole is greater than the sum of its parts.

The result: The regular carne asada burrito was good in a mediocre way.  Nothing special about it, but nothing bad about it either.  It was of an average size, with an average flavor, an average cost, in a seemingly average setting (average for SF, which may be atypical everywhere else?).  The individual components seemed appropriately seasoned, but not in a way that was special.  The lime was a pleasant addition as it typically complements Mexican food, however the salsa did not seem to complement with the burrito.

Eventually, I did go back to try the chile relleno burrito… and my life has not changed.  And I took a photo of a chile relleno plate that my girlfriend ordered: 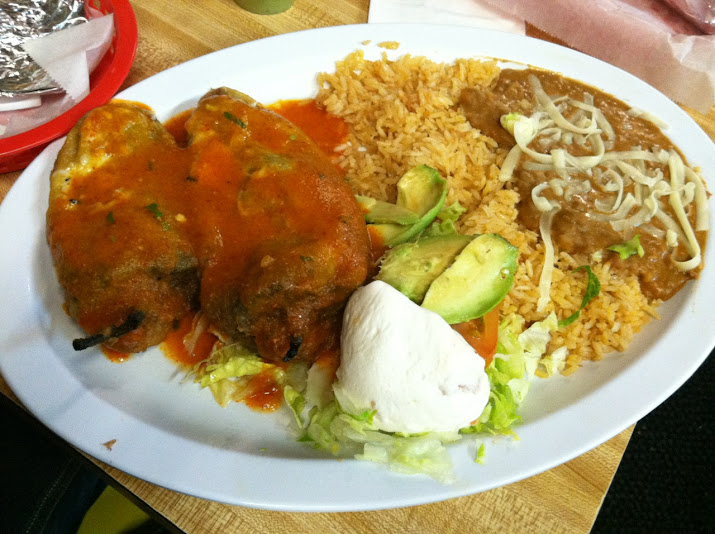 I even went back a third time, to try their carnitas burrito (my usual backup if carne asada is lackluster), and my opinion remained the same.

My conclusion: I think many of the readers have been shown what a true burrito should be by going to El Farolito.  This is a good thing, as I am a fan of burritos and seek to explore taquerias in SF to find a favorite.  For many people whose lives were changed, I posit that El Farolito likely set the bar, giving them a new standard with which to measure future burritos.  But in my decades of taqueria burrito-eating experience, it just isn’t special.

To complete my review… the bathroom was musky, but relatively clean for a place in SF’s Mission district.  I didn’t shudder like I do when I have to hold the handrail on the Muni.  The line for the cashier seemed in itself a slice of San Francisco, with people of all kinds: yuppies, homeless-looking folks, a hipster couple, some unsupervised children, one elderly asian lady, and someone dressed like Michael Jackson.  If only I took a picture.