At first, Claudine’s left me slightly disappointed.  But then after much pondering (over the course of a few weeks), I think it is simply “good.”  I would be comfortable recommending it, and it is a good date spot (note to self!), with a reliable assortment of French dishes (as far as one visit can show me).

First of all, Claudine is pretty.  San Francisco is pretty, for that matter.  Sometimes I take it for granted, sadly. 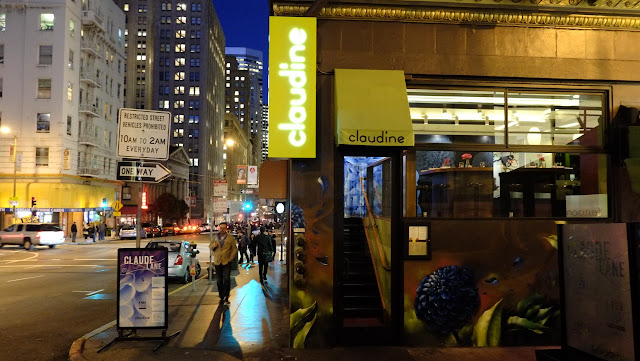 I checked this place out by happenstance.  A friend of mine who often travels was in town and available for dinner. After a bit of discussion, we settled on Claudine as the place to go based on the online menu.  In particular, the chicken caught my eye, and I had made up my mind to try it before I even got to the restaurant.

My friend made the easy mistake of walking into Cafe Claude next door. Maybe Apple Maps led him astray (actually, Google Maps Street View doesn’t seem to be able to show this either)!  Jokes aside, it is actually easy to confuse them all since Claude Cafe and Claudine are adjacent to each other on Claude Lane.

Upon arriving, I was pleasantly greeted.  Service was actually very efficient and polite, and I was glad because it allowed for some great conversation with my friend.  They let us have our choice of tables and we chose a place right in the middle.  Because it just felt right.  Plus you could see the kitchen and the cool lighting at its dining counter. 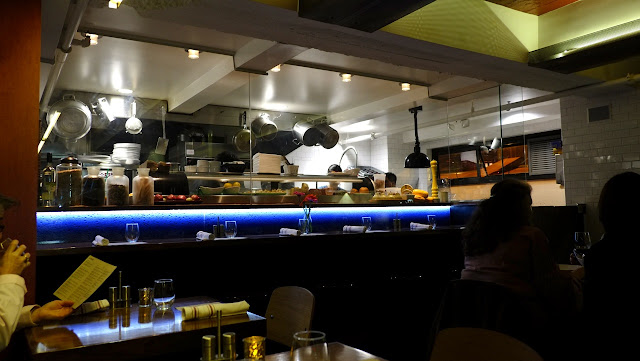 Like I mentioned, I got the chicken (Poulet au Citron; pan roasted chicken breast, parsnips, turnips, marble potatoes, lemon).  And this was the most perplexing part of my first experience at Claudine.  It was good eye candy, was good tongue candy, and was paired well with the items on the plate. 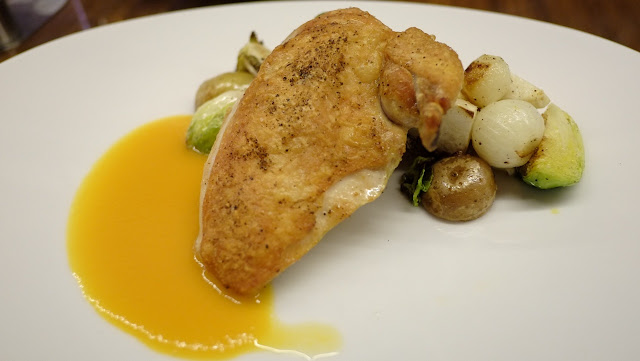 There was definitely that harmony that I look for, since each bite of chicken was better when combined with the available sauce veggies.  I mean, the citron sauce itself was fairly bland, but when you ate it with the vegetables one understands why it is even there; it adds a rich, creamy texture with a subtle citrus hint that complements but does not mask the vegetables or the chicken.  Eating the vegetables alone or the chicken alone was sufficiently satisfying, though definitely better together.

And it’s the chicken specifically that had me ruminating, in both senses of the word.  The skin was delicately crispy, a sign of a competent chef.  But the meat was dry and a little tough, a sign of a typical chicken breast.  I still don’t know how to interpret this. Is it cheap chicken?  Was it overcooked somehow?  Is this simply the nature of white chicken meat?

I mean, I know that Costco rotisserie chicken is absurdly tender, because of all its tenderizers injected into it.  And I know KFC is tender because it is pressure cooked.  But KFC made me throw up (too greasy) and Costco is… Costco.

So when it comes to a pan roasted chicken, do I have a frame of reference?   I do, in fact.  My friend and I both mused about our experience at Gramercy Tavern in NY, which gave us both a new standard of perfectly cooked chicken in the hands of a skilled chef.  I still remember it to this day, though it has been years.  Sometimes one bite is all it takes to inspire!  I would totally go to NY to have that chicken again.  Both of us would, actually.

And another thing.  I wouldn’t be B-san if I didn’t have room for dessert. 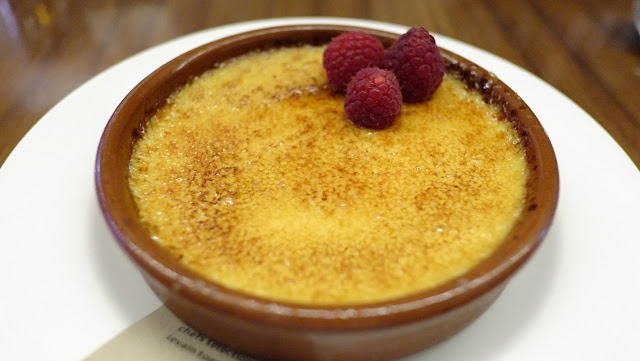 In the literal sense, I look for a creme brulee to be fairly light (not as rich) in flavor, silky smooth creaminess in texture, with a sufficiently thick layer of caramelized sugar to get a satisfying crunch when I tap it with my spoon, but not so thick I need to exert more effort than a flick of the wrist.  This was close but not what I was looking for.

I’m certainly no stranger to desserts and have sufficient intestinal fortitude to eat all the things.  But this creme brulee started getting old by the time I was halfway through it.  Not because it was an “American-sized” creme brulee (~5″ diameter and 0.75″ thick)… It is because of the eggy-ness of it.  I was not expecting an egg custard, and it seemed almost halfway between an egg custard and cream.  I’ve experimented with many a creme brulee recipe and I haven’t perfected it myself so I know how hard it is.  It was good but not $7 good.  At least it is better than the creme brulee cart (but that is to be expected when going to a French restaurant).

Plus when I re-read the dessert menu, I interpreted “caramelized brown sugar” as brown sugar that was caramelized.  Rather, it tasted like the organic raw azucar sugar that I’ve been recently consuming.  Definitely didn’t seem like granulated sugar to me, perhaps closer to raw sugar, but totally not brown sugar.  So I’m not sure what that’s about.

Perhaps my conclusion on Claudine is that it the food is indeed properly cooked by a competent chef, but it is not teh awesome.  But it doesn’t have to be for me to appreciate it.  I haven’t had a better chicken skin on this coast.  Yet!  I certainly can’t make a better chicken on my own.  I wouldn’t bother with the creme brulee though.  But I would go back and try other dishes, since I do believe the chef knows what he/she/they is/are doing.  Plus the experience was great and the ambiance is charming.

Adieu for now, Claudine.  Until next time!

PS – I did not check out the restroom.

PPS – My friend got the gnocchi parisienne, which wasn’t like italian gnocchi (as we assumed given its title), but we didn’t know what else to expect.  (=  He also got the pudding au caramel.  He thought both were good but not exemplary.  I don’t think he’ll specifically be going back, unlike me. 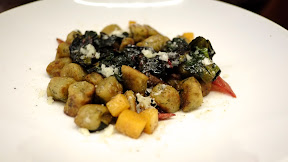 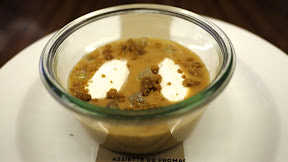