Of course you’ve heard about the Cronuts from New York.  If you haven’t, then LMGTFY!  I figured it was only a matter of time before it spread, and I was right. 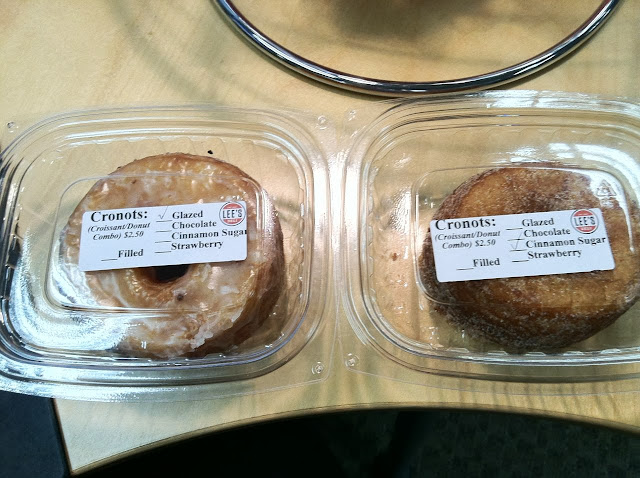 Seeing that I’m not in NY, I haven’t had a chance to try the original Cronut.

As soon as I found out alternatives were available in San Francisco at Lee’s Deli in Financial District, made by Posh Bakery, I sought them out and easily returned with two.  No lines, and plenty in stock!  I chose ones I thought would be solid choices.  I tend to like fairly normal donuts, so I decided to skip the Chocolate and the Strawberry options; I picked up a glazed and cinnamon sugar Cronots.

I opened the first box with eager anticipation! 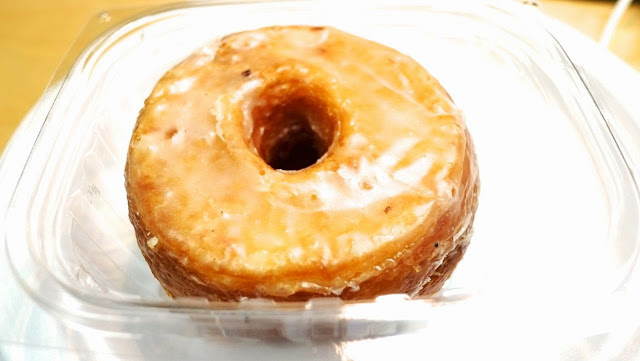 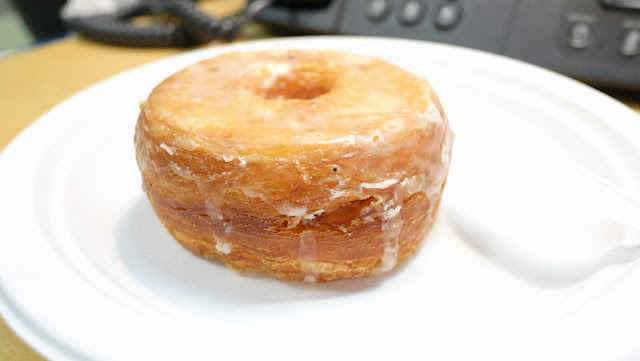 It looked more like a cylinder, with straight and vertical sides.  It looked similar to the original in this way.

I cut it open to see the inside: 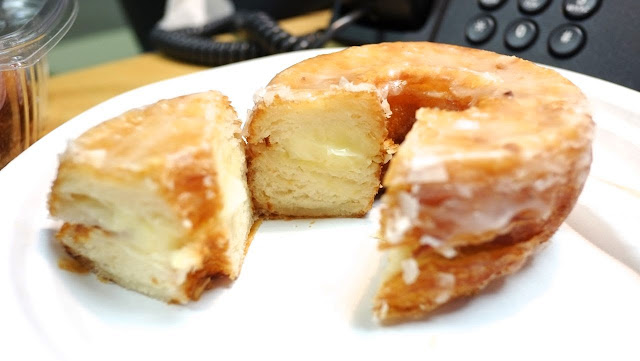 First, the label was wrong.  There was no check mark nor X next to the “_Filled” label.  Here, I was surprised to find a cream filling.  My second surprise was that it looks more like dough instead of layered croissant despite its textured exterior; just look at it!  This is not like the Cronut.

But was it good?

I quickly cut several pieces and shared with those around me.  I took a bite and realized that I had a slightly stale Cronot that was somewhat doughy, perhaps because I had purchased this around 1pm.  No part of this Cronot was crispy, savory, or buttery (as a croissant would be); I was a little disappointed because of these expectations I had.

But… was it good?

Expectations aside, I actually liked it.  The outside wasn’t rot-your-teeth-sweet, but rather an appropriate sweetness suitable for a donut of its size.  The cream inside was pleasantly smooth, with a lightly sweet vanilla flavor.  It worked.

Then it hit me!  I neglected to warm the Cronot!  IMHO, most pastries will taste better if reheated slightly in a toaster oven.  Fortunately, I had another Cronot to prove this right. 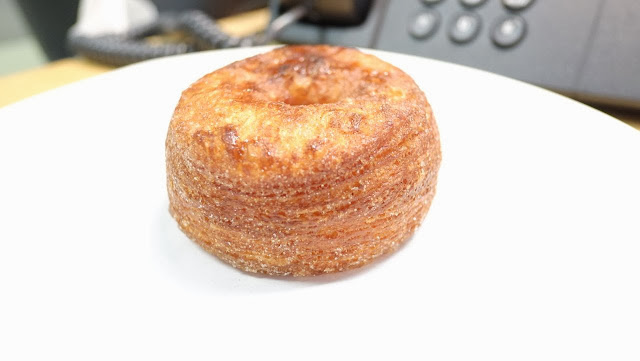 Similar to the glazed Cronot, the cinnamon sugar Cronot looks like it has the expected layers one may find in a croissant.

I first put it in a toaster oven at 400˚F for approximately 4 minutes.  Then I cut it open to examine: 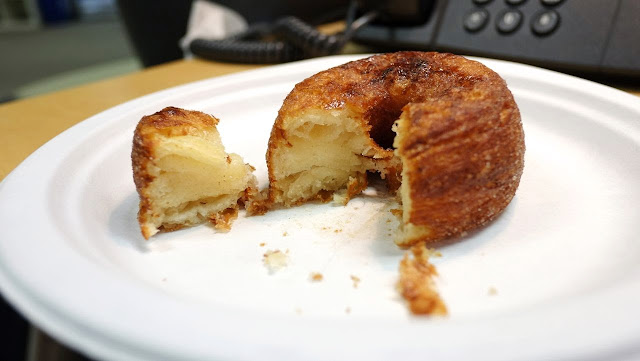 The moment the knife touched the Cronot, I discovered I had actually toasted its outside layer (rather than simply reheat it)!  4 minutes was perfect!  It was crisp, smelled freshly baked, with both a sweet (from the sugar) and savory (like a croissant) aroma.  I salivated with anticipation.  I like warmed pastries!

Clearly, it was layered like a croissant.  Expectations were met, given its exterior appearance! 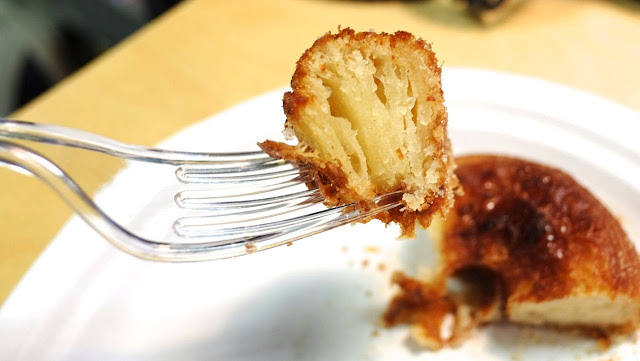 Not only was its smell mouth-watering, but it looked, felt and tasted as if it was freshly made.  The exterior was crisp, yet the interior was soft, layered and fluffy.  I don’t know that fresh croissants should be crisp, but the contrasting texture worked well in this case.  The cinnamon and sugar were in good ratio, and they were in tasteful proportion to complement the tall Cronot.  Overall, the entire experience was awesome!

As with the prior Cronot, I shared with those around me.  This time, eyes lit up, heads nodded, and tongues were delighted.  This is what I was looking for!

This was a compelling product.  In fact, I became upset that earlier reviewers dismissed the Cronots.  I felt like I had been let down!  Not only were reviews that I came across lacking in food photography, but I hadn’t had a sufficient explanation of others’ expectations nor experiences, and others’ reviews were unsatisfyingly brief.  Perhaps their disappointment was due to inconsistent Cronut production.  Only time will tell.

The toasted cinnamon sugar Cronot made my expedition all worth it.  I would get this again, and I recommend it!